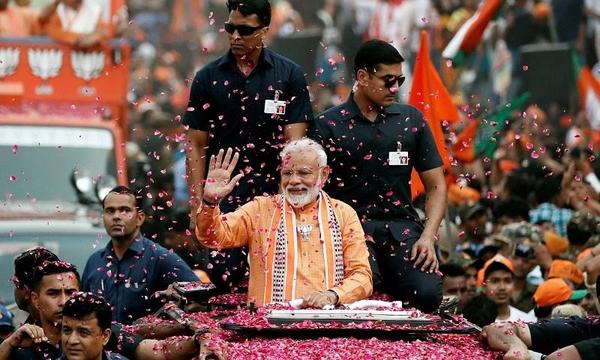 Just six months after sweeping to re-election, Indian Prime Minister Narendra Modi has delivered on two major promises of his Hindu-first agenda, electrifying his base but sowing unease among liberals and the nation's Muslim minority.

The latest boost for Modi came on Saturday, when the Supreme Court handed Hindu groups control of a contested site where a 16th-century mosque was razed over two decades ago, paving the way for the construction of a temple there that has long been an election promise of the ruling Bharatiya Janata Party (BJP).
That followed New Delhi's move in August to strip Muslim-majority Indian-occupied Kashmir of its special status in what Modi's government said was a bid to integrate the restive region with the rest of predominantly-Hindu India.
Now, the BJP may move towards delivering on its third traditional plank: Creating a uniform civil code that does away with the independence of religious communities.
“After just a few months of Modi 2.0, they've accomplished two out of three (main cultural objectives). It's quite possible that they will accomplish all three by next year,” said Milan Vaishnav, a senior fellow at the Carnegie Endowment for International Peace in Washington D.C.

“It's striking that the government has moved with a clarity of purpose on its social agenda that's completely absent when it comes to economic matters,” added Vaishnav in reference to the slowing of the country's once red-hot economic growth.

Many Muslims have watched with a mix of fear and resignation as the BJP has morphed into the officially secular country's near-undisputed political force.

The controversial site in the northern state of Uttar Pradesh has been one of the most explosive issues in the nation of 1.3 billion, where Muslims constitute about 14 per cent of the population.

In 1992, a rally led by the BJP and affiliate organisations spiralled out of control and a Hindu mob destroyed the Babri Masjid in the city of Ayodhya. That triggered riots in which about 2,000 people, most of them Muslims, were killed across the country.

In its verdict on Saturday, the Supreme Court called the mosque's demolition illegal but handed the plot of land to Hindus, who believe the site is the birthplace of Lord Ram, a much venerated god-king. The court directed that another plot in Ayodhya be provided to a Muslim group that contested the case.

In over a dozen interviews, Muslim community leaders, businessmen, and students said they respected the verdict but it exacerbated their sense of alienation.

“Why did the court then give a ruling which is completely one-sided? Was the court under pressure? We don't know. We can't trust anyone now. No door is open for us,” said local Muslim community leader Azam Quadri during evening prayers in Ayodhya.

'Best to be numb'
While Modi himself has said the court verdict should not be seen as a “win or loss” for anyone, many Muslims Reuters spoke to expressed resignation after the ruling.

Some were bitter that a probe into the demolition has inconclusively dragged on for three decades and that many of the politicians accused of conspiring to take down the mosque are prominent BJP members. Those people have said the demolition was spontaneous and not planned.

“I feel humiliated by the Supreme Court verdict,” said one affluent Mumbai-based Muslim businessman, who declined to give his name. “Others don't care. They have become numb. It's best to be numb in Modi's India.”

Some people believe that Hindu nationalists, galvanised by the Ayodhya triumph, could turn their attention to two other Uttar Pradesh mosques they believe Mughal conquerors built over the remains of Hindu temples centuries ago.

“This (verdict) seems to generate incentives for Hindus to take down mosques and resettle,” said Neelanjan Sircar, an assistant professor at Ashoka University near New Delhi.

Another likely move is the uniform civil code.

New Delhi has already taken steps toward creating such a code, with the BJP-led parliament in July outlawing the centuries-old right of a Muslim man to instantly divorce his wife. While many activists thought the Muslim custom was wrong, some Muslim groups said Modi was targeting them while turning a blind eye to discrimination in Hindu society.

Despite the focus on social issues, political analysts predict the government and the BJP will have to shift attention quickly to a sagging economy and surging unemployment or risk losing popular support.

Two college students — one Hindu, one Muslim — in Uttar Pradesh's capital Lucknow separately said after the court verdict that they hoped the government would now focus on economic issues.

“This case has gone on for so long [...] Now that it's done with altogether, maybe more economic issues can come forward”, said Rajat Mishra, a business student.

“Attention can now move beyond topics of religion,” said medical student Irfan, 22, who declined to give his surname.