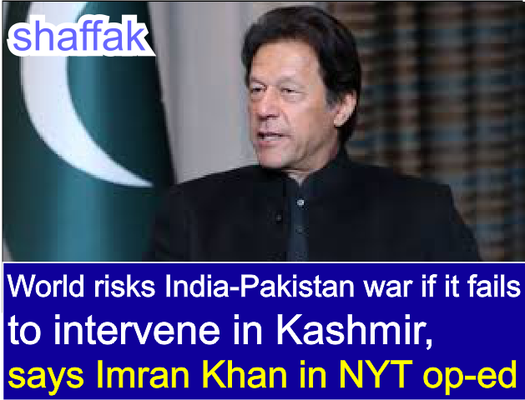 The Pakistan prime minister said the two nuclear-armed states were inching towards a direct military confrontation.
Pakistan Prime Minister Imran Khan on Friday called the Indian government’s decision to revoke Jammu and Kashmir’s special constitutional status earlier this month an “assault on Kashmir and its people”, and warned about an imminent military escalation between the two nuclear powers if the world does not intervene.

In an op-ed article in The New York Times, Khan said he wanted to normalise relations with India and called for dialogue on the Kashmir dispute. “If the world does nothing to stop the Indian assault on Kashmir and its people, there will be consequences for the whole world as two nuclear-armed states get ever closer to a direct military confrontation,” he alleged.The prime minister highlighted his efforts to ensure peace and accused New Delhi of cancelling the meeting between the foreign ministers of the two countries arranged on the sidelines of the United Nations General Assembly session last year. He claimed to have written to Indian Prime Minister Narendra Modi thrice after that. However, India rebuffed all his efforts, he added.

Khan said he congratulated Modi after his victory in the Lok Sabha elections in May and wrote to him again the following month but received no response. The Pakistan prime minister said his government had assumed that Modi’s anti-Pakistan rhetoric was for the elections.

Imran Khan also wrote about the February 14 Pulwama terrorist attack in which 40 Central Reserve Police Force Personnel were killed. He said the government of India “promptly blamed” Pakistan for the attack even though they had asked for evidence.

The Pakistan prime minister said he had chosen not to retaliate after an Indian fighter jet was brought down in Pakistani territory a few days after the Indian Air Force carried out air strikes in Balakot on February 27. “I made a conscious decision to show that Pakistan had no intent of aggravating the conflict between two nuclear-armed states,” Khan wrote. He pointed out that his government even sent back Indian Air Force Wing Commander Abhinandan Varthaman, whose jet was allegedly shot down in Pakistan before he was captured.Khan said India had mistaken Pakistan’s offers for peace talks as “appeasement”. He said Islamabad was against a new India governed by the “products of the Rashtriya Swayamsevak Sangh”.

The Pakistan prime minister has repeatedly hit out at the Narendra Modi administration for imposing a security lockdown in Jammu and Kashmir since revoking the state’s special status in the constitution. He has on more than one occasion likened the ruling Bharatiya Janata party’s ideology to that of the Nazis.

In the op-ed, Khan also mentioned Modi’s alleged complicity in the 2002 Gujarat riots. “I had hoped that being elected prime minister might lead Mr Modi to cast aside his old ways as the chief minister of the Indian state of Gujarat, when he gained global notoriety for the 2002 pogrom against local Muslims on his watch and was denied a visa to travel to the United States under its International Religious Freedom Act – a list of visa denials that included associates of Slobodan Milosevic,” the article said.

He said during Modi’s first term as prime minister India witnessed the lynchings of Muslims, Christians and Dalits by right-wing mobs.Khan said the Centre’s moves in Jammu and Kashmir were illegal and violate the United Nations Security Council resolutions on Kashmir and the Simla Agreement between the two countries. He said Islamabad viewed India’s “no first use” nuclear policy with skepticism as Indian leaders have periodically made statements that it may review in the future. On August 16, Union Defence Minister Rajnath Singh had said India had always adhered to the “no first use” policy but he had added, “What happens in the future will depend on circumstances.”

Khan said any dialogue on Kashmir must include all stakeholders, especially the people of Kashmir.The tensions between India and Pakistan have escalated since India’s moves in Kashmir on August 5. Pakistan responded by downgrading diplomatic ties and suspending bilateral trade. It has raised the matter at the United Nations Security Council, and threatened take it to the UN Human Rights Council and the International Court of Justice as well.

While Indian authorities have claimed they are working on restoring communication lines gradually, sporadic protests in the Valley have slowed down the process. Reports suggest that authorities have used excessive force against protestors, with tear-gas shells and pellet guns being fired.