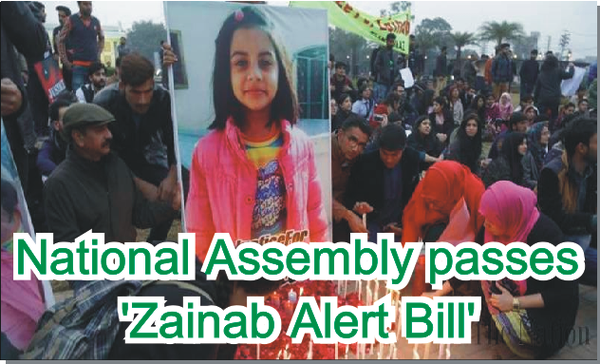 The National Assembly on Wednesday passed the Zainab Alert , Recovery and Response Bill, 2020 aimed at raising alert, response and recovery of missing and abducted children. Minister for Human Right Dr. Shireen M. Mazari moved a motion for consideration of the bill as passed by the Senate of Pakistan with amendments. The bill will become an “Act of Parliament”, when President put his signature. The House passed the motion and considered the bill as reported by the Senate. All cases involving the kidnapping, rape and murder of minor children will be required to complete investigations within three months.

The bill will raise the required alerts and initiate the responses required for recovery of missing, abducted, abused or kidnapped children in entire country. It will help to provide speedy system for alerts, responses, recoveries, investigations, trails and rehabilitation to prevent and curb criminal activities against the children. It will also ensure harmonization and cohesion in the workings of the new agencies and institutions established for the protection of children and already exacting mechanisms within this field.

According to bill, the maximum sentence handed down to perpetrators of child sexual abuse will be life imprisonment with a fine of Rs1 million while the minimum sentence will be 10 years. It also suggested that Zainab Alert , Response and Recovery Agency (ZARRA) will be established headed by Director General to be appointed by Prime Minister in such manner and in such terms and conditions as may be prescribed the rules. It demanded that management staff of ZARRA should be suitably equipped with skills of managing databases, conducting planning and monitoring of programs, analyzing data, preparing reports and coordinating with all other officers.

It suggested that ZARRA shall work closely with the helpline 1099 or such other helpline operating under the mandate of the Division concerned. In this regard, the helpline shall forward complaints relevant to the mandate of ZARRA, which shall be acted upon in partnership between ZARAA and the National Commission on the Rights of the Child (NCRC) established under the National Commission on the Rights of Child Act, 2017. The bill also proposed taking action against police officials who cause unnecessary delay in investigating such cases, adding that those who fail to respond to the alert within two hours may also face action. The local police and concerned law enforcement agencies shall on receipt of information would take an immediate action and launch investigation, search, rescue and recovery operations.

ZARRA shall, wherever required, coordinate the efforts of the concerned police stations and other federal and provincial agencies, authorities or departments. Upon receiving information that a child is missing, the officer in charge of a police station shall reduce the same into writing in the same book and in the same manner as prescribed for a cognizable offense under section 154 of the Code of Criminal Procedure and shall be under a duty to cause investigation of the same and recover the missing child and also ensure that the required information in Schedule A to this AC, is made part of the complaint. The Minister for Human Right Dr. Shireen M. Mazari thanked all the political parties for the supporting the bill. “I am pleased that all the political parties have support the bill, I am also thankful to the Human Right Committees of Senate and National Assembly for their support”.