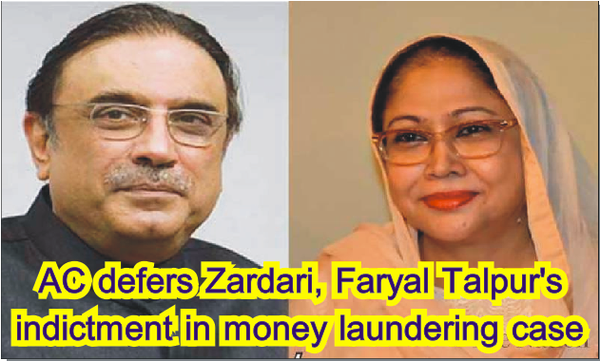 An accountability court deferred former president Asif Ali Zardari and his sister Faryal Talpur's indictment once again in the mega money-laundering case. Proceedings for the reference could not be held on Friday as judge Azam Khan was not available for the hearing. Another main suspect in the reference, Abdul Ghani Majeed, and others appeared before the court.  A plea bargain report pertaining to the reference is expected to be presented in court at the next hearing.

The case will now be heard on July 29.  On July 6, Zardari could not face indictment in the Park Lane reference after his lawyer, Farooq H. Naek, requested the court for additional time to prepare for the case. Zardari has requested an exemption from court appearances due to the coronavirus pandemic. The court had earlier decided to frame charges against Zardari via video link at the hospital or his residence in case of his ill health. Registrar of the accountability court had written a letter to NAB, Karachi for finalising arrangements for the PPP leader’s indictment.

In October 2015, the anti-corruption wing of the Federal Investigation Agency in Karachi received a tip-off of suspicious intra-bank transactions from the Summit Bank, Sindh Bank and the United Bank Limited. The profiles of the account holders did not match their earnings/income. FIA authorities suspected that these accounts were being run by the Zardari Group and Omni Group, amongst others.

The case dragged on until June 2018, when the Supreme Court took suo moto notice of the fake accounts and directed a Joint Investigation Team (JIT) to probe the matter. The investigation team concluded that 32 fake bank accounts were being operated by 11 fake entities to launder money from “kickbacks, land grabbing and large scale misappropriation of public funds.”