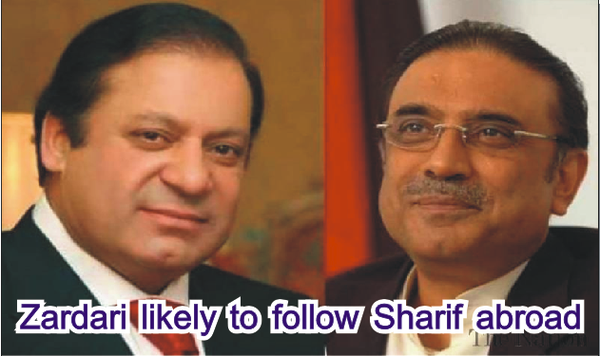 ISLAMABAD - Pakistan People’s Party co-Chairman Asif Ali Zardari is likely to fly abroad for treatment after Pakistan Muslim League (Nawaz) supremo Nawaz Sharif - who awaits a cabinet nod to lift the travel ban, political sources said yesterday. Close aides of the PPP leadership told The Nation that Zardari himself was not in favour of striking any deal with the government for his release.

“There will be no plea bargain (referring to the out of court settlements with the National Accountability Bureau to repay corruption money). We are, however, expecting him (Zardari) to fly abroad after Nawaz Sharif. We will take up this issue in and outside the parliament. There should be no two laws. He (Zardari) is also seriously ill. If Sharif can be released, why can’t Zardari get the same facility,” said a senior PPP leader who is regularly in contact with Zardari. Another PPP leader said that Zardari, a former President, was against bowing before the government. “The party is active for his release. We want him to go abroad for medical treatment but he himself is against making any request to the government. We will convince him (to go abroad) once we secure his release from the court,” he maintained.

Yesterday, PPP lawyers and party chief Bilawal Bhutto Zardari failed to convince Asif Ali Zardari to apply for bail plea in the NAB case against him. Zardari said: “It’s my case and only I will decide about it. Let’s see what government of Pakistan Tehrik-e-Insaf will do with me now.”

The PPP leadership has also written an application to form private medical board for the check-up of the ex-president. PPP’s application states that doctors had pointed out Zardari’s severe health issues, adding that uncontrolled sugar level can create problems. On October 22, 2018, Zardari was brought to Pakistan Institute of Medical Sciences from Adiala jail and admitted to the cardiology department’s VIP ward. He had complaints of backache, weakness and anxiety. Yesterday, PPP chief Bilawal Bhutto Zardari said Zardari had still not been given access to specialist doctors and personal physician. “Our family is increasingly concerned about his health. If anything happens to our father this govt will be held responsible,” he tweeted.

PPP parliamentary leader in the Senate Sherry Rehman said government was not giving Zadrari access to specialist doctors and his personal physician. She said Zardari’s health was deteriorating with every passing day. “No private medical board is being formed for the erstwhile president’s health,” she added. PPP central Punjab President Qamar Zaman Kaira said Zardari had always been a victim of discrimination. “He spent more than a decade in prison for undone crimes and now again he has been jailed on assumptions. He has a right to medical treatment in or outside the country,” he said. Kaira said NAB or the government had no solid case against Zardari and they were just settling political scores.