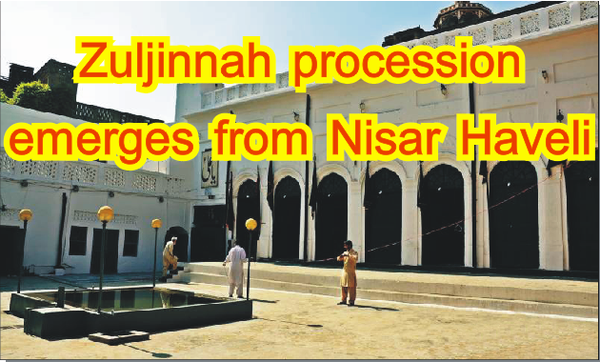 LAHORE -Youm-e-Ashur, the 10th of Moharram, is being observed on Sunday (today) across the country with due solemnity to pay homage to the supreme sacrifice rendered by Hazrat Imam Hussain (R.A.) and his devoted companions in Karbala. The mourning processions are taken out in all the cities and towns of the country. Standard Operating Procedures have also been issued for the mourning processions after consultations with the religious scholars to avoid spread of COVID-19.  Ulema and Zakireen will highlight the bright and candid teachings of Hazrat Imam Hussain (R.A.) and various aspects of Karbla tragedy. In connection with the 9th Muharram on Saturday, Taazia, Alam and Zuljanah processions were taken out in different parts of the country in memory of martyrs of Karbala. Elaborate security arrangements are made to avoid any untoward incident.

The central Zuljannah procession emerged from Nisar Haveli inside Mochi Gate late on Saturday night amidst elaborate security arrangements. The procession will culminate at Karbala Gamay Shah Sunday evening after completing day-long journey on its traditional route.  Before the start of the procession, Zakirs narrated Massaibs of Hazrat Imam Hussain (AS), his family members and companions at Majlis-e-Aza. A large number of chest-beating and Noha-reciting mourners participated in the Majlis and later joined the procession.

A large number of Sabeels of juices, milk and water were set up not only by Shia but also Sunnis along the procession route to facilitate the mourners.  All markets and businesses were closed while the press issued special supplements and the electronic media aired special programmes to highlight the significance of Ashura.

The police and Rangers personnel are patrolling the area while snipers have taken positions on the rooftops of the buildings along the route to keeping an eye on miscreants. In addition to that, army helicopters are also monitoring the procession along their routes. The route of the procession has been closed for the general public while law enforcing agencies personnel have blocked the roads in the close vicinity. Local residents using the route to reach their houses are being thoroughly searched. Walkthrough gates and scanners have been placed at the entrances to procession and Imambargahs for searching the participants. The residents of the buildings along the route have been barred from opening their windows and coming to roofs.

The administration has put up extra lights along the route to lighten the area to facilitate the security personnel in maintaining law and order, especially at night.  Ambulances of public sector hospitals and various other relief organisations are alert for transporting those wounded in flagellation to nearby health facilities while the volunteers will provide first aid to the mourners. After the culmination of the procession, a Majlis-e-Shaam-e-Ghariban will be arranged inside Karbala Gamay Shah in which noted zakerin will highlight the importance of the sacrifice by Hazrat Imam Hussain (AS) and his companions.