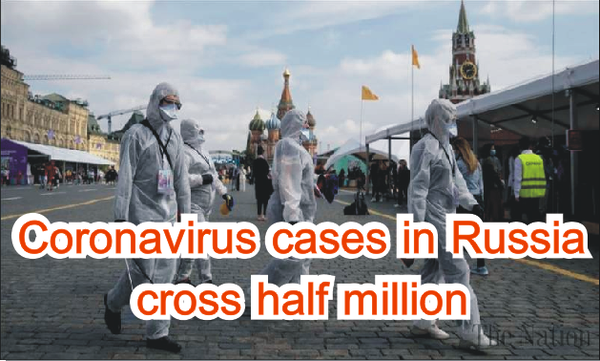 The number of coronavirus cases in Russia exceeded half a million on Thursday. With 8,779 new infections confirmed over the last 24 hours, the tally rose to 502,436, the country's emergency task force said in a daily report. Over the same period, the virus claimed the lives of 174 people, raising the death toll to 6,532, it said. Recoveries reached 261,150 after 8,367 more people were successfully cured and discharged from hospitals, it added. In late May, the Russian government started to lift restrictions inside the country, saying the situation had stabilized and proceeded to economic recovery measures.

Speaking at a video conference with government officials on Wednesday, chief sanitary officer Anna Popova said there was "a clear downward trend in daily increments." She stressed that there were two different outbreak development processes ongoing in Russia, one in Moscow and the other across the country. At the beginning of the pandemic, 67% of new daily cases were recorded in Moscow and the Moscow Region against 33% in the rest of Russia. Today, the Moscow Region accounts for 23% of new cases and other regions for 77%.

She also added that large numbers of infected people showed no obvious symptoms and were, therefore, easier to treat and were easier to deal with via very broad testing. On Monday, Russian Prime Minister Mikhail Mishustin announced a partial opening of borders for international travel, while Moscow Mayor Sergey Sobyanin lifted the lockdown on the capital.

Since originating in China last December, the pandemic has claimed over 416,200 lives in 188 countries and regions. The US, Brazil and Russia are currently the world’s worst-hit countries. Some 7.36 million cases have been reported worldwide, while nearly 3.45 million patients have recovered so far, according to figures compiled by the US' Johns Hopkins University.