2 FC personnel martyred, as many injured in gun attack on FC vehicle in DI Khan 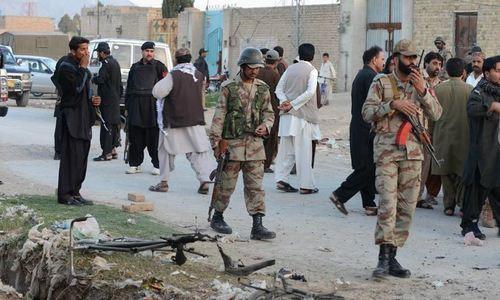 The incident occurred in the Bacha Abad area of the Kulachi tehsil.

According to District Police Officer (DPO) DI Khan Dilawar Bangash, the FC personnel were on their way to their check post in Loni area when "unidentified armed terrorists" attacked them near Qasim river.

The DPO said that after "responsive firing" by the personnel, the militants escaped.

The injured FC personnel were shifted to the hospital. The site of the attack was sealed off by security forces and a search operation was launched.

Last week, three siblings were killed when a toy bomb exploded in their house in Daraban Khurd area of the district. The victims’ father, Safdar, had found the bomb looking like a ball during work in his fields and brought the toy home and gave it to his children to play with.

As soon as the children started playing with it, the ball exploded, killing the three siblings on the spot.