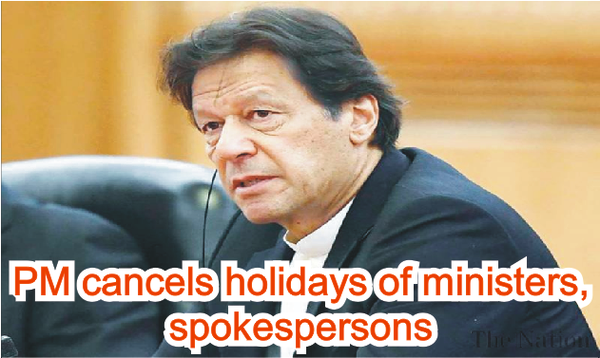 ISLAMABAD     -    Prime Minsiter Imran Khan has cancelled holidays of Cabinet members and spokespersons of his party with a direction to ensure presence in media and defend the government, The Nation has learnt reliably. A senior PTI leader told The Nation on the condition of anonymity that the prime minister asked the ministers, advisers and spokespersons not to go to their constituencies or hometowns on weekend and appear on media, TV talk shows actively and counter the narrative of Jamiat Ulema-e-Islam’s (JUI-F) anti-government Azadi March.

Usually cabinet ministers leave Islamabad on Fridays for their hometowns and no senior minister or leader is available for TV talk shows on weekend to defend the government policies and decisions. He said the prime minister advised the senior ministers to ensure their availability for talk shows especially Umar Ayub, Zulfi Bokhari, Khusro Bakhtiar, Ijaz Shah, Murad Saeed, Ali Zaidi, Hafeez Shiekh, Hammad Azhar, Shahryar Afridi and others. Most of time, these ministers are avoiding to participate in TV talk shows. He said mostly junior or second tier of leadership appeared in talk shows and they could not counter the opposition senior leader’s criticism of government in the media.

He said mostly PTI leaders and cabinet members highlight their ministries’ achievements through social media or beepers on TV but avoid going to participate in TV talk shows. “Information ministers of Punjab and Khyber Pakhtunkhwa have also been conveyed to show their presence in the media. Following the directions, Information Minister Punjab Mian Aslam Iqbal addressed to a press conference and grilled the opposition’s Azadi march,” he added. Opposition has joined the JUI-F’s Azadi March and Pakistan People’s Party Chairman Bilawal Bhutto Zardari, Pakistan Muslim League-Nawaz President Shehbaz Sharif had attended the March along with their senior party leaders and also addressed the protesters.