In letter to Shahbaz, Nawaz tells PML-N to 'ensure Azadi March is a success' 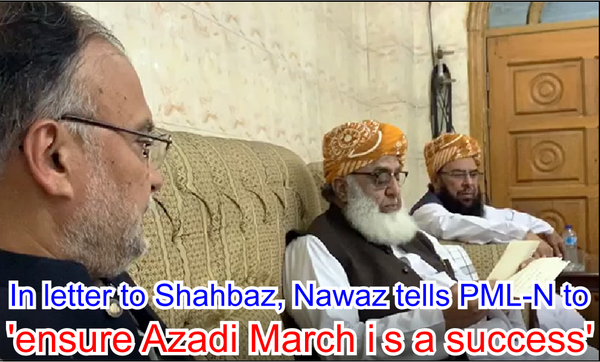 Incarcerated former prime minister Nawaz Sharif has relayed a message via a letter to all members of the PML-N "to ensure that the anti-government protest (Azadi March) is a success".

The letter, dated October 10, is addressed to his brother, PML-N President Shahbaz Sharif, and its contents were discussed with JUI-F chief Maulana Fazlur Rehman on Sunday.

Nawaz had announced two days ago that he had written a letter to Shahbaz detailing the future course of action of the party, and had expressed hope that the PML-N president would brief the media on it.

"When the country's honour, its self respect is at stake, we must stand up and defend our rights," read the letter.

Nawaz requested Rehman, who has called on all parties to join him in the march, to release a "comprehensive programme" regarding the march.

The former premier said that he "gave a lot of thought" to Rehman's proposals. Rehman had met Nawaz and informed him of the discussions held in a meeting of the JUI-F central executive committee.

In a press conference following the meeting, PML-N senior leader Ahsan Iqbal said that a party delegation had called on Rehman and put forth the PML-N's recommendations for the march.

"Nawaz Sharif has said that maulana sahib's call for a protest post-elections was the right decision," said Iqbal, adding, "We support his 'Azadi March'."

Iqbal called on all opposition parties to participate in the march.

Rehman, while addressing the press conference, said that he is grateful to the PML-N for extending its support to his call for a march.

"PML-N, PPP, Awami National Party, Qaumi Watan Party and Muttahida Majlis-i-Amal are all with us," he declared.

He said that an 'Azadi March committee' oversees all march-related matters on a daily basis and that a session of the party's central executive committee will be held on October 24 after which the final agenda for the march will be announced.

"There is still time. The government should resign and go home," said Rehman. "If they don't voluntarily do so, we will be forced to send them home."