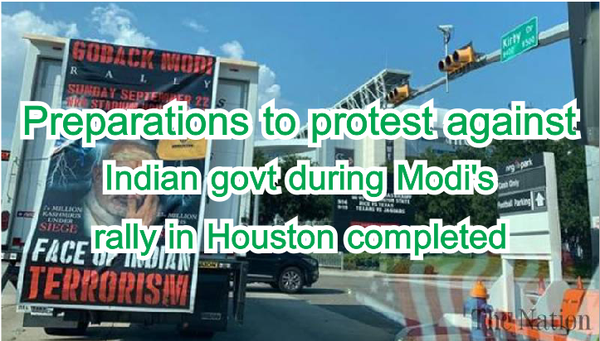 Preparations have been completed to hold protest against Indian government during its Prime Minister (PM) Narendra Modi’s rally in Houston. According to details, the protest will be conducted against Indian move of abrogating occupied Kashmir’s special status and continuous human rights violations in the valley. Sources told that thousands of protesters including Kashmiris and Sikhs are expected to participate in the demonstration with placards and banners to raise their voices against Indian atrocities.  For the purpose, buses have been arranged so that the protesters can easily arrive at the NRG Centre, the venue of the Indian Prime Minister’s public gathering.

On the other hand, normal life remains disrupted due to continued Indian military lockdown on 49th successive day in IoK today (Sunday). Millions of people have been besieged in their houses as hundreds of thousands of Indian troops continue to be deployed in every nook and corner of the valley.  All shops, markets, business establishments and educational institutions remain closed while transport is off the road. The people are facing immense problems due to continued suspension of communications means including internet and mobile phone services.