Indian paranoia seeps into the sea 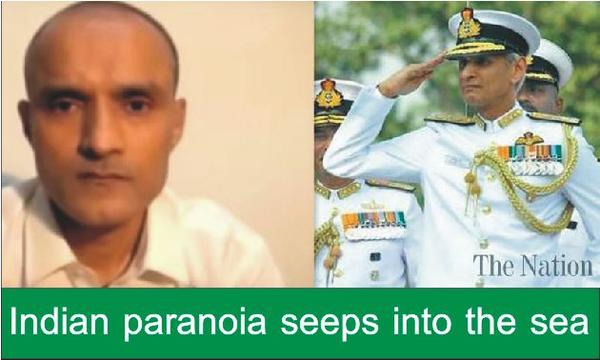 Indian Navy Chief Admiral Karambir Singh has created a controversy after he used alleged intelligence reports to claim that the militant group Jaish-e-Mohammad (JeM) was training its members to carry out underwater attacks, but assured that his force is fully prepared to face any such eventuality. The Indian Navy chiefs claims have been met with widespread skepticism by experts. Some assert that such statements are essentially the result of the deep paranoia of the Indian security establishment which utilizes such groups routinely against opponents.

Experts and observers have largely dismissed Karambirs allegations as political statements that do not fit the facts on the ground. The Jaish-e-Mohammad organization has largely been dismantled inside Pakistan owing to FATF commitments and never at any point in time did it have enough power or wealth to start a sophisticated Naval wing. According to them, Indian Naval Chiefs assertions is largely political in order to raise the bogey of Pakistan backed terrorism as well as probably lay the foundation of a false flag operation as being warned by the Pakistani government.

Others state that the Naval Chiefs remarks actually portray the paranoia of the Indian establishment which itself has been culpable in the use of terrorism as a foreign policy option. India has an active policy of creating, funding and supporting terrorist groups such as Mukti Bahini, Shanti Bahini, Tehreek-e-Talliban Pakistan, Baloch Sub-national terrorist groups and the Tamil Tigers. The Tamil Tigers are infamous for their advancement in tactics such as suicide bombing, use of hidden suicide belts and ironically water based attacks. The Tamil Tigers in fact colluded with Al-Qaeda in October 2000 to attack the US Naval ship USS Cole through a suicide attack via boat. It was Indian authorities to enrich the Tamil Tigers in water borne attacks which is now haunting Indian Navy for similar tactics on their land and assets.

Captured Indian intelligence officer Kulbhushan Yadav, a serving Commander of the Indian Navy, is the most recent example of Indias affinity to using terrorism to attain its hegemonic designs. Kulbhushan has confessed training separatists in Balochistan. My mission was to train Baloch separatists for attacks in the coastal areas of the province, he told investigators. The targets included Gwadar deep seaport, maritime installations and infrastructure along the coast.

The allegations of the Indian Navy chief coincide with what can be called a barrage of claims in the Indian Media about an impending militant attack in Indian Gujrat by a Pakistan based group. Many assert that a false flag attack could be initiated by India in order to divert attention from the humanitarian crisis in Occupied Kashmir. What seems visible in an endeavor to defame Pakistan and keeping Indian Navy relevant in the current milieu amid growing Hindutva infiltration in Indian armed forces including the Navy.  It could be said hat as India has made use of such terror groups in the past, it is now gripped that such tactics will now be used against it. The Naval Chiefs allegations could be the manifestations of such entrenched paranoia in the Indian establishment.