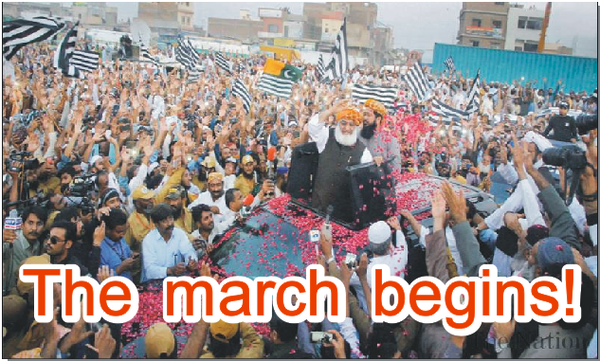 Karachi - The opposition’s Azadi March began from Karachi on Sunday with JUI-F chief Maulana Fazlur Rehman reiterating the demand of the resignation of Prime Minister Imran Khan.The anti-government protest march, under the lead of Jamiat Ulema-i-Islam Fazl (JUI-F), is planned to hit the capital on Thursday (October 31). Addressing a huge public gathering at Sohrab Goth at the beginning of the march, Fazl said Karachi gathering has proved the rulers wrong who claimed that the party would only be able to gather few hundred activists. “This is only Karachi [crowd] which is beyond the expectations of the rulers,” he said, and asked as to what would happen when a much bigger number of people would enter Islamabad. The leader of the religiopolitical party claimed that the frightened government reached out to them for an NRO but they rejected it.

After a meeting between the committees of government and opposition on Saturday, the two sides had claimed of reaching an agreement about the modalities of the march. Pervez Khattak, the head of government negotiation team also claimed that the opposition committee did not demand resignation of the prime minister and they had assured them of not entering the Red Zone and keeping their protest peacful. But Fazl said in his Karachi speech that they were sticking to their demands. “We will not backtrack from our demand of resignation of rulers and the [Prime Minister] Imran Khan has to resign as he is not the real ruler and was brought through rigging,” he told the charged crowd of opposition supporters. “We neither accept the [2018 general] elections nor the results through which the incumbent government was formed and present rulers were selected,” he declared.

A large number of JUI-F activists including its volunteers force Ansar Islam took part in the gathering. Rallies of other opposition parties including Pakistan People’s Party (PPP), Pakistan Muslim League-Nawaz (PML-N), Awami National Party (ANP) and others also joined the public gathering. According to the plan, the march would reach Sukkur on Sunday night after travelling on M-9 motorway, touching Hyderabad and other key cities, and enter Punjab Monday morning. Some JUI-F rallies from Balochistan have joined the main caravan at Karachi while more would join them at Sukkur. A special container has been prepared for top leadership’s travel and addresses to the participants of the rally. Protest venue in Islamabad Speaking about the reported agreement, regarding change of venue of the protest in Islamabad, reached in the talks between the government team and the opposition’s Rehbar Committee a day before, Fazl rejected any deal on it and said that they only agreed to adhere to the court orders.

“We will ensure that our stay in Islamabad remains within the boundaries of court orders... We will not get trapped in any government plan [and will not provide them an excuse] to justify use of power ... [we] will remain peaceful.The JUI-F chief lambasted the government for “revoking” the nationality of party leader Hafiz Hamdullah and arrest of Mufti Kifayat Ullah from Islamabad. He said that such tactics would only boost the spirit of the party activists, instead of discouraging them.He said the government made mockery of itself by revoking the nationality of Hamdullah whose forefathers lived in the country. “We will not be deterred by such acts and Hafiz Hamdullah will join us in Islamabad as any other Pakistani.”

Fazl asked if his party leader was not a Pakistani then what about Moeen Qureshi and Shaukat Aziz who were imposed as prime ministers on this country just because of their closeness to western powers. Solidarity with Kashmir The JUI-F chief expressed solidarity with Kashmiris saying that entire nation stood alongside them in testing times and it would continue to support them for getting their right to self determination. “It is on our call that the entire nation is observing [black] day to express solidarity with Kashmiris,” he said. Fazlur Rehman said that the solidarity day gives a message to brutal Indian authorities that violation of human rights and three months long curfew in occupied territory was unacceptable.

“We appeal the international organizations to take notice of it,” he said, adding that they would not remain silent on this oppression by the Indian government and forces. Recalling the history, Fazl said that on this day in 1947, Indian forces entered Kashmir and occupied it but brave men fought against them and liberated a part of the state - Azad Kashmir- which now acts as a base camp for the liberation movement. He said that the entire nation is on one page over the issue. “We do not know why our rulers have compromised on the issue but the nation will not accept any backdoor deals over it,” he stressed. Other leaders addresses Leadership of other parties including Senator Raza Rabbani of PPP; Zubair Umar, Nehal Hashmi and Shah Mohammad Shah of PML-N; Shahi Syed of ANP; and others also attended and addressed the gathering.

Senator Rabbani said that they want to give a message to Modi government and India that despite their atrocities, three months long curfew and filling prisons with young Kashmiri men, they would be unable to suppress the movement of Kashmiris. “They should remember that such freedom movements could not be suppressed by use of power.” Rabbani also raised questions over silence of Muslim Ummah on the issue and said that they should also play a proactive role as Pakistan has played on other issues of the Muslim Ummah. “We demand that the Ummah should come forward on the issue and support Kashmiris.” Speaking on internal issues, he said the country also faces grave human rights issues like missing persons and suppression of labour class. “The rising inflation has affected poor [and this is happening] only because of the selected government which has given IMF freedom to formulate policies of the country,” he said.