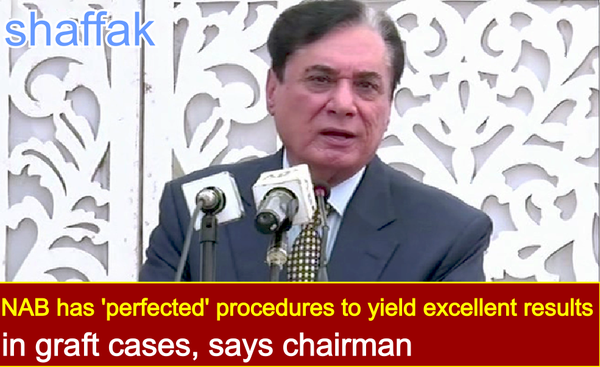 National Accountability Bureau Chairman (retd) Justice Javed Iqbal, in his first detailed visit to the bureau's Karachi office on Wednesday, claimed the anti-graft body had "perfected" its procedures owing to which "excellent dividends" were being realised in the eradication of corruption.

The NAB chairman on the occasion said that the bureau is committed to bringing an "absolute" end to mega corruption cases for which he said an "accountability for all" policy had been adopted.

“NAB has devised an effective anti-corruption strategy for eradication of corruption which has started yielding excellent dividends,” claimed the head of the anti-graft body.

He added that NAB had been rejuvenated after taking "new initiatives".

“In order to rationalise the workload, timelines have been prescribed for efficient, effective and expeditious disposal of cases putting a maximum limit of 10 months from complaint verification, to inquiry, to investigation and finally to a reference in the accountability court.”

Justice Iqbal said that in order to ensure uniformity and standardisation, the SOPs (standard operating procedures) for investigation officers (IOs) were reviewed and revised after a gap of 10 years. "To benefit from the experience and collective wisdom of senior supervisory officers, a system of CIT (combined investigation team) comprising of director, additional director, IO and a senior legal counsel has been put in place," he said.

“This is not only lending quality to the work but also ensuring that no single individual can influence the proceedings,” said the NAB head.

The NAB chief appreciated the performance of NAB Karachi.

Sources within the bureau said that there were at least 1,100 affectees of the ‘Rufi Global City’ case and this was considered to be one of the remarkable performances of NAB Karachi that the affectees had got possession letters of plots and cheques.

Briefing on high-profile cases
The NAB chairman, in a meeting, was briefed about perceived high profile cases such as against the Sindh Assembly speaker, according to officials and sources within the bureau.

Sources said that the main focus of the meeting was on cases related to political figures and necessary instructions were issued to this effect.

According to an official statement issued after the meeting, Director General NAB Karachi (retd) Brig Farooq Naser Awan, in his briefing pointed out that since October 11, 2018, the anti-graft body in Karachi had filed corruption references against former federal minister, Dr Asim; provincial lawmaker, Sharjeel Memon; Sindh Assembly Speaker Agha Siraj Durrani; and former federal minister, Kamran Michael; all of which were under trial before the concerned courts.

Sources told Dawn that the murder case of TV anchor Mureed Abbas over a "financial dispute" in Defence also came under deliberation as NAB was probing its financial aspect on the request of police authorities.

The case against arrested LNG magnate Iqbal Z Ahmed was also deliberated, added the sources. Both cases are still under investigation.

The sources said that NAB chairman also held a separate meeting with experts about the case against Ahmed as so far, no "concrete evidence" has emerged against him.

Karachi bureau's operations
Meanwhile, according to a NAB statement, the DG NAB Karachi informed the participants of the meeting that they received 9,887 complaints in year 2018-19 and out of them, 346 complaints were completed/disposed of to date.

NAB Karachi has also authorised 93 complaints during the same, said the statement.

“NAB Karachi filed 65 corruption references in 2018-19 whereas 28 references are ready for filing after approval of the chairman NAB,” according to the statement.

It was stated that 159 accused persons were arrested by NAB Karachi during 2019. In addition, NAB Karachi also helped other regional bureaus in the arrest of 32 accused.

“The overall conviction ratio of NAB Karachi in respected accountability courts is about 84 per cent,” claimed the DG NAB.

Officers prevented from airing grievances
Prior to the chairman's arrival, employees were "discouraged" from airing their work-related grievances, sources within the bureau said.

The sources said that investigation officers (IOs), considered as the Bureau's backbone, were "discouraged" to raise issues pertaining to perceived weak prosecution, the "dilapidated" building, poor infrastructure, lack of facilities, vehicles and shortage of staff.

“There is a complete void or gap between NAB leadership and the organisation's backbone (IOs),” said one official who wished not to be named.

The sources said that since this was the first detailed visit of the NAB chairman to Karachi, IOs had hoped that they would be allowed to raise such issues of weak prosecution etc but they were "discouraged".

They said that some months ago, DPG (deputy prosecutor general) of NAB Karachi, who can plead cases before the apex court, was removed over alleged unsatisfactory performance and was not given another contract. Since then, no DPG has been appointed in Karachi.

They further said that Nab IOs frequently faced "embarrassment" over weak prosecution of cases before Sindh High Court, which tended to summon the PGA (prosecutor general accountability) from Islamabad.

They added that the present office of NAB in Karachi was located in an "old" building where officers don’t have sufficient place to keep their record.