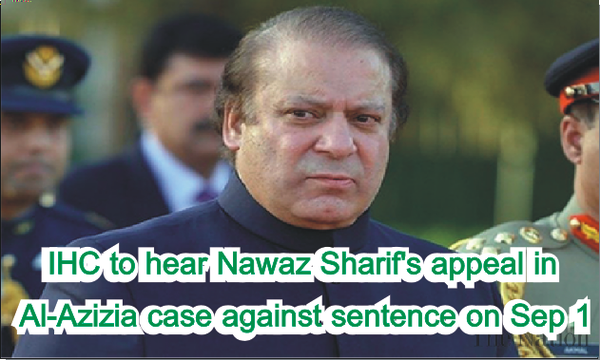 An appeal against the sentence of former Prime Minister and Pakistan Muslim League Nawaz (PML-N) leader Mian Muhammad Nawaz Sharif has been fixed for hearing in Al-Azizia Steel Mills reference. A two-member bench of the Islamabad High Court will hear the appeal on September 1. At the same time, NAB's appeals against Nawaz Sharif's extension of sentence and his acquittal in the flagship reference have also been fixed for hearing.

The last hearing on Nawaz Sharif's appeal in the Al-Azizia reference was held on September 18. A special bench of the Islamabad High Court comprising Justice Amir Farooq and Justice Mohsin Akhtar Kayani has been constituted to hear the appeals of Nawaz Sharif and NAB. It should be noted that Accountability Court Judge Muhammad Arshad Malik had given the verdicts of Al-Azizia Steel Mills and Flagship References. Judge Muhammad Arshad Malik was sacked following a video scandal.