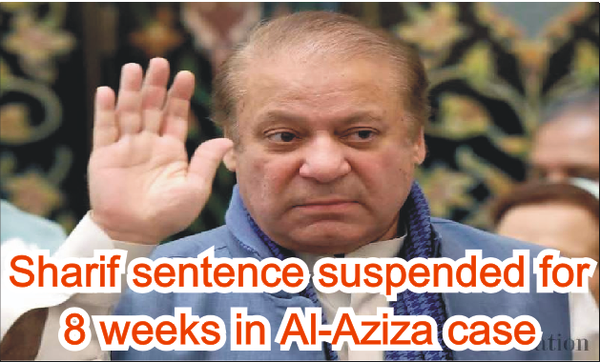 The Islamabad High Court (IHC) has granted bail to former premier Nawaz Sharif, suspending his sentence for eight weeks on "medical grounds". The suspension of the sentence comes in the case pertaining to the Al-Aziza corruption reference, and a two-member judge bench comprising of Justice Amir Farooq and Justice Mohsin Akhtar Kayani gave the verdict on a plea submitted by Sharif's brother, Shehbaz Sharif. The verdict suggests that the suspension of Sharif's sentence can be extended if his health does not improve in eight weeks, and the court ordered that the Punjab provincial government should be the resort of Sharif if he needs another bail extension. Nawaz Sharif was asked to submit two bail bonds worth Rs2 million.

Dr Adnan, who is Nawaz Sharif's personal physician, the former prime minister is in a critical condition, suffering from thrombocytopenia, which explains his low platelet count, and also suffered a heart attack while undergoing treatment at the Services Hospital in Lahore. His condition is complicated by his chronic kidney issues.

Earlier this week, Sharif had obtained bail in the Chaudhry Sugar Mills case that was being heard in the Lahore High Court (LHC). Sharif's own defence lawyer, Khawaja Harris, told the court that because of an angina, doctors said they were unable to treat all of Nawaz Sharif's ailments, which seem to have exacerbated over the week. According to a medical report on October 26, Sharif's heart was not functioning properly, and the medical board is dissatisfied with the current treatment Sharif is receiving. Adding that the former prime minister would need medical treatment of his own choice, Harris said once Sharif's health improves, he can go on continuing his sentence.