PTI's one year: Has tabdeeli come to Karachi? 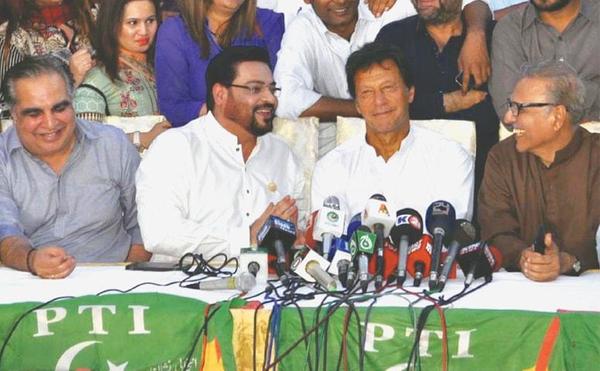 The monsoon rain was a nightmare for Karachi. It caused a complete breakdown of urban life and no help was forthcoming for the hapless citizens approaching various official helplines and complaint portals. or the past few years, conditions are such that the city's residents can only dream of basic utilities such as access to clean drinking water, a working waste water disposal system, timely removal and disposal of garbage, decent public transport, a working and dependable healthcare system, quality educational facilities, safety from thefts and street crimes, reliable power and fuel supply and affordable housing options.

Pakistan's largest city has heard many promises and seen many schemes that were supposed to guarantee a more livable metropolis: military dictators tried to revive local governments and subdued provincial administrations in order to find a solution; with their majority vote bank in other areas of Sindh, provincial governments didn't represent Karachi beyond the optics; and becoming allies and then sitting on opposition benches, the party that once represented Karachi's majority did not achieve much after 2008 either.But soon emerged a 'saviour' on the political horizon. The Pakistan Tehreek-i-Insaf (PTI) was seen by Karachi's denizens as the answer as early as 2012. However, during the national elections the following year, the PTI could only form a provincial government in Khyber Pakhtunkhwa — but received support in other parts of the country, including Karachi.

With its pro-establishment leanings, the PTI was successful in consolidating its narrative — especially around accountability — and emerged victorious in the 2018 polls. Its successful election performance in Karachi gave the party extraordinary political strength. hen Prime Minister Imran Khan announced his cabinet, many new faces from Karachi ascended to power, including Ali Haider Zaidi and Faisal Vawda. The President of Pakistan and the Governor of Sindh also came from Karachi, alongside many appointed advisers. The party, therefore, had many voices to advocate for the city.

But what did not change was the political equation at the provincial level, where the Pakistan People's Party (PPP) retained its tight grip after winning a comfortable majority. he PTI manifesto contained a section, Transform Karachi. Launching a new city governance model, depoliticising the police, initiating a crackdown on land and bhatta mafia, ensuring access to clean drinking water, improving waste management system, championing housing for the urban poor and enhancing mass transit system capacity were some of the core points.

Interestingly, almost all of these fall under the Sindh government's jurisdiction. The 18th Amendment extends substantial powers to the provincial chief minister, his cabinet and subordinate administrative departments. The party thus faced a dilemma: how to create an institutional premise to deliver on the mandate?The PTI-led federal government had three distinct possibilities to work in Karachi, and elsewhere in Sindh. he first was to mend fences and develop a working relationship with the PPP. From a governance perspective, this was mere common sense: whereas the federal government had a larger development portfolio to allocate from, the provincial government had the legal and administrative privileges to make use of these funds.

However, this did not happen. Due to continued political confrontation and subsequent arrests of top PPP leadership, active collaboration became impossible. he second option for the PTI was to contribute to Karachi’s development solely through federal institutions: the Karachi Port Trust, Port Qasim Authority, Pakistan Railways, Pakistan Public Works Department, Sui Southern Gas Company, federal law enforcement agencies and cantonment boards. hese institutions' functions and jurisdictions are, however, limited. None of these bodies have the mandate to be able to properly address the complex urban problems facing the city. While Pakistan Railways attempted to work with the Sindh government to revitalise the Karachi Circular Railway, the outcome has been invisible. The federal government also constituted bodies to execute other development projects, but their success is contingent upon the provincial government's support.The third option was to collaborate with the local government. The PTI’s outreach extends to the Karachi Metropolitan Corporation and three District Municipal Corporations, where they have the support of the Muttahida Qaumi Movement (MQM), their coalition partners at the centre.

But municipalities' capacity to deliver services had severely eroded over the period of time due to the Sindh government's strict control over them under the new local government regime, high costs because of over staffing, poor quality of man power and limited technical and administrative resources. esides, according to some political pundits, the coalition between the MQM and the PTI was a marriage of convenience. It is amusing that during electioneering, both parties severely criticised each other over various counts. But due to the thin majority the PTI possessed in the national assembly, the MQM’s support was crucial.

During and after the elections, the MQM was facing tremendous pressure from the deep state. Serious criminal cases, allegations of fascism and terrorist conduct within the various ranks of the party were being investigated by various agencies. iven the circumstances, it was easy to make the MQM enter the coalition. The relief was visible and the PTI seemed to forget the crimes their news partners had been accused of committing — including the murder of Zahra Shahid Hussain.It is too early to predict the future course of action of the two parties in next elections. Perhaps the upcoming local bodies elections — expected to take place soon — may unveil the electoral tendencies. One can conclude that both the PTI and the MQM will have to do a lot more to impress Karachi's citizens.

To give Karachi some hope, Imran Khan announced a Karachi package earlier this year comprising various development projects, with the net outlay of Rs162 billion. 10 projects were in urban transportation and seven were for water and sanitation. The prime minister also voiced support for the preparation of a master plan for the city. he fundamental question remains as to how the federal government shall undertake these ventures given the fact that the Sindh government's support is a pre-requisite. The second and third options that I outlined above are not necessarily ideal either.

With the exception of the Green Line BRT — a carryover from the previous federal government — all the other projects, such as Greater Karachi Water Supply Scheme Phase IV where the federal and Sindh governments are co-financiers of the initiative, will take a long time to complete. any young voters and professionals are diehard PTI supporters, but this vote bank is not mobilised to the level where they are active participants in the development plans their party may have for the city. ome 30 years ago, the MQM emerged as a well-oiled machine powered by youngsters who did wonders on many fronts. The only offshoot visible for the PTI, however, is an NGO managed by a party MNA that works to solve Karachi’s municipal problems. It has run many campaigns and protests, but is yet to acquire the form of a popular mass movement. The student and women wings of the party need to be reinvigorated as well. ut above all, it is the PTI law makers and office bearers who will have to develop a Karachi strategy for making their electoral victory worth the while for the metropolis.