FBR teams to start verification of import documents from September 1 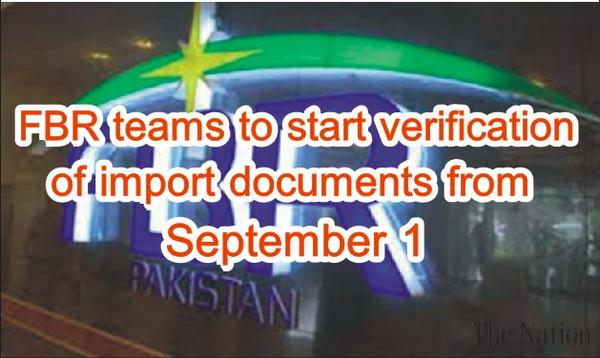 Under the instructions of Chairman FBR, the Federal Board of Revenue has started a phased program to combat sale of smuggled goods in the local market. In this regard, it has been decided that Special Joint Teams of the FBR will be visiting major shopping areas especially large retailers in major cities to check the import documents of the imported goods available for sale to ensure compliance to various requirements of the law with effect from September 1, 2019, said a statement.

Under the Provisions of the Customs Act, 1969 FBR has powers to seek import documents for the imported goods available for sale to consumers from the person dealing in such goods. "It is reiterated that this exercise does not represent ‘raid’ on the premises or any coercive action against the traders.

The purpose of this exercise is only to ensure that relevant import documents are available and foreign goods available for sale are properly backed by documents," it said.  It has further been decided that such exercises will be undertaken on ‘test’ check basis.

All teams will be conducting respective identification as being officially designated and the team will be headed by a senior person.  In case if for any reason such documents are not readily available at the shops/offices then teams will provide adequate opportunity to submit the document in the respective offices/ shops after reasonable time.

Member Customs (Operations) and Member (IR-Operations) have been directed to supervise the activity and provide complete assistance to the Joint Teams wherever required. Director General (Intelligence & Investigation) Customs and Director General (Intelligence & Investigation)-Inland Revenue have also been directed to constitute Joint Teams.

The traders can lodge complaints against any undesirable activity by the Special Joint Teams by reporting at the helpline 051-111 772 772 or email Helpline@fbr.gov.pk. "The purpose of taking this step is to expedite drive against smuggling and protect the local economy of the country. Government of Pakistan is undertaking various steps to curb these undesirable practices and inter alia some actions to this effect have also been incorporated in the Finance Act, 2019," the statement issued by the FBR said.