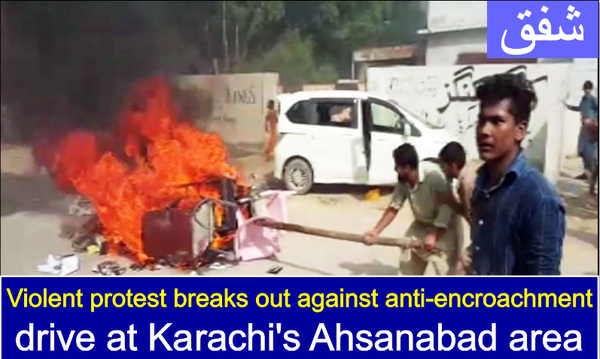 Police resorted to teargas shelling and a baton charge as protesters set vehicles on fire and blocked Superhighway (now Motorway) in protest against an anti-encroachment drive in Karachi's Ahsanabad area on Sunday, according to officials and witnesses.

The drive was being carried out under directions of the apex court, said officials.

As the authorities concerned backed by law enforcers tried to remove encroachments from ‘green belts’, parks and other amenity plots, area residents put up resistance and a portion of Ahsanabad turned into a battlefield of the protesters and the police.

Two private vehicles and the home of one of the members of the Ahsanabad society who was said to be active against encroachments were torched by an angry mob.

The senior officer said that "certain political elements and close relatives of elected representatives" were allegedly leading the protest against the anti-encroachment drive.

“The protest was carried out under the patronisation of the land mafia,” he said.

Under directions of the honourable court, the police along with other institutions were playing their role to maintain law and order, he added.

"This drive was being carried out since the last four months under the apex court’s directions to remove encroachments from amenity plots, parks and open spaces from Ahsanabad society," said DIG Farooqi.

He said the persons involved in the riots would be taken to task and that the "registration of a case is underway".

The police said that a significant portion of Ahsanabad cooperative housing society — 200 out of 500 acres in total — was based on encroachments.

Sharing details of the alleged encroachments, the police claimed that till April 2009, there were no encroachments in Ahsanabad, particularly Allah Bux Goth, but ‘China-cutting’ allegedly began in February 2010.

When the apex court took notice of the encroachments, directions were issued to the authorities that same month to deploy at least five guards there to prevent encroachments.

In April 2011, the judiciary directed the then East DIG, Malir SSP, and others to take action against the encroachments.

In the year 2012, the court directed the police authorities to provide extra force and implement their order within seven days.

In February 2013, Allah Bux Goth was encroached manifold as the police authorities failed to implement the court’s order.

In 2014, roads and open spaces were encroached as part of ‘China-cutting,’ according to an official report compiled on the court's directives.

Next year, the court directed the Sindh inspector general to personally appear before it and explain as to why its order was not being implemented. As the police chief did not appear, the court issued a contempt of court notice to the Sindh IG, Malir SSP and Sindh Board of Revenue officials.

By September 2018, around 80 per cent area of Allah Bux Goth was encroached allegedly by land grabbers and original allottees were threatened of dire consequences if they pursue the case, according to the official report.