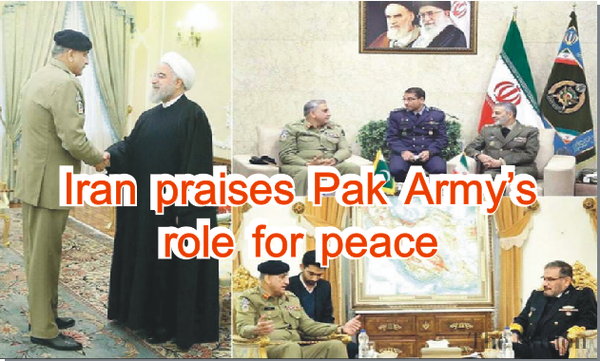 ISLAMABAD - Iranian President Hassan Rouhani appreciated Pakistan’s role towards regional peace and also lauded successes of the Pakistan Army against terrorism, the Inter-Services Public Relations (ISPR) said on Tuesday. The development came during a meeting between him and Chief of Army Staff (COAS) General Qamar Javed Bajwa who is in Iran on an official visit. The meeting was held to discuss the regional security environment and matters of mutual interest. According to Iranian media, President Rouhani highlighted the importance of the country’s security ties with neighbouring Pakistan and said Tehran and Islamabad can easily defeat terrorists in the region.

“Given the resolve that exists in Iran and Pakistan, we can easily defeat the terrorists,” Rouhani further said. “Iran welcomes the efforts of its neighbours to resolve regional countries’ problems,” he said. The Pakistani Army Chief also held meetings with other Iranian officials, including Chief of Staff of the Iranian Armed Forces Major General Mohammad Hossein Baqeri and Army Commander Major General Abdolrahim Mousavi and Secretary of the Supreme National Security Council Ali Shamkhani.

A day earlier, the COAS had meeting with Chief of Staff Iranian Armed Forces, Major General Mohammad Hossein. The two sides discussed the prospects of expansion of defence cooperation between the two countries. Border security, counter-terrorism cooperation, promoting border trade exchange and convergence among Muslim countries was also on the agenda of the talks. It is to mention here that border security has long remained a major issue between Pakistan and Iran.