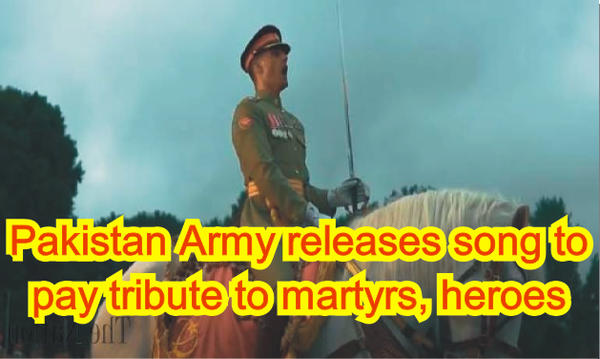 Pakistan Army spokesperson on Saturday released a song titled “Har Ghari Tayyar Kamran” to pay tribute to the country’s martyrs and heroes on the eve of Defence and Martyrs’ Day on September 6.  The music video showcased the sacrifices of Pakistan as a nation in fighting terrorism and the evolution of our Armed Forces as a cutting edge military structure; second to none. It also incorporates stylized shots of the singers patriotically supporting their heroes.

Renowned music maestro, Ali Hamza (Noori) has put his heart and soul into this song, giving a contemporary spin to its composition, originally sung by Khalid Waheed and written by Zafar Ullah Poshni. Additional lyrics have been penned by Ali Hayat Rizvi. Sharing details of the song “Har Ghari Tayyar Kamran” on Youtube, the ISPR said the song is a remake of an old patriotic song of the 1980’s by the same name.

Pakistan’s top melody voices; Ali Hamza, Ali Azmat, Ali Noor and Asim Azhar have collaborated for the Defence and Martyrs’ Day 2020. The musicians pay tribute to the services rendered by our armed forces and their operational readiness. Ali Hamza, with his creativity, has composed a first of its kind blend of modern Rock sound with a riveting performance by the Military Band from the Army School of Music, the ISPR said.  The ISPR further said, “The special composition of the song can rightly be called, "A Melody of Pride".