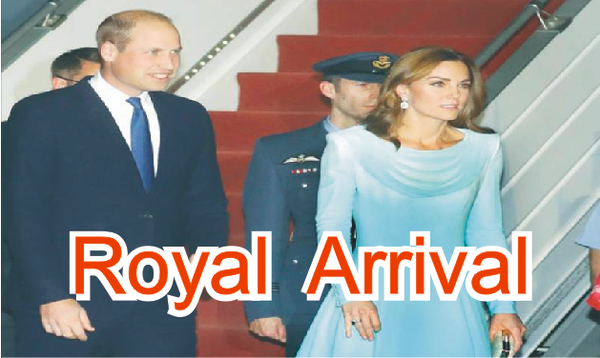 ISLAMABAD - The British Royal couple, Duke and Duchess of Cambridge, Prince William and Kate Middleton arrived in Islamabad yesterday on a historic five-day visit to Pakistan to build lasting friendship. Foreign Minister Shah Mehmood Qureshi, British High Commissioner in Pakistan Thomas Drew and other high level officials accorded a warm welcome to royal couple upon their arrival. Two children clad in traditional dress presented bouquet of flowers to the distinguished guests. The royal couple will meet President Arif Alvi and Prime Minister Imran Khan today (October 15). Following their meeting with President Alvi and PM Khan, the royal couple will pay a visit to Lahore on October 16 and Chitral on October 17.

The visit comes 13 years after Charles and Camilla – the Prince of Wales and the Duchess of Cornwell – toured the country in 2006. Pakistan still vividly remembers the late Princess Diana’s visit in 1996. Speaking to journalists about the royal visit, FM Qureshi said this would cement the existing friendly ties between Pakistan and the United Kingdom. “This is historic visit. It is very significant. We have very good ties with the UK and we hope to cement them further,” he said. The minister said Pakistan and the UK have traditionally been close and this visit would bring them further closer.

A British High Commission statement said: “Their Royal Highnesses (TRH) The Duke and Duchess of Cambridge arrive in Pakistan today (October 14) on their first official visit of the country. "Throughout their visit The Duke and Duchess will tour the country to see the dynamic, aspirational and modern Pakistan. From the modern leafy capital Islamabad, to the vibrant city of Lahore, the mountainous countryside in the North, and the rugged border regions to the West, the visit will span over 1000km, and will take in Pakistan’s rich culture, its diverse communities, and its beautiful landscapes.

“TRH’s programme will include visiting projects which empower young people, and communities that are rapidly responding and adapting to the effects of climate change. Over the course of the visit, TRH will meet a wide variety of people, including children and young people, leaders from government, faiths leaders, business and the charity sector, inspiring conservationists, and well-known cultural figures and sporting stars.” The statement further said: “The UK’s links with Pakistan are extensive, and TRH are looking forward to building a lasting friendship with the people of Pakistan.”

Earlier, a statement issued the royal couple’s spokesperson on Oct 4 said, “The UK’s links with Pakistan are extensive, and Their Royal Highnesses are looking forward to building a lasting friendship with the people of Pakistan.” During the course of their visit, Prince William and Kate “will pay respect to the historical relationship between Britain and Pakistan" but the larger focus will remain “on showcasing Pakistan as it is today – a dynamic, aspirational and forward-looking nation,” read the statement. British High Commissioner in Pakistan Thomas Drew said during their five-day visit, the Royal couple would visit the ‘breadth and depth’ of Pakistan. In his video message shared on Twitter, the High Commissioner said the visit would largely focus on showcasing Pakistan as a dynamic, aspirational and forward looking nation.

He said most importantly the Royal couple hope to meet as many Pakistanis as possible during the visit particularly the youth who are shaping future of the country. He said the duo was looking forward to building a lasting friendship with people of Pakistan. This month, the Kensington Palace had described Prince William and Kate Middleton’s upcoming visit to Pakistan as their “most complex” tour to date. Pakistan has ensured strict security for the royal couple. A Police spokesperson said that Inspector General of Police Islamabad Aamir Zulfiqar, along with other senior officials, had reviewed the security arrangements made for their visit to Islamabad. Back home, the British royal couple was urged by many to postpone the visit amid the growing Pak-India tension. But the couple, in the end, decided to go ahead with the trip.