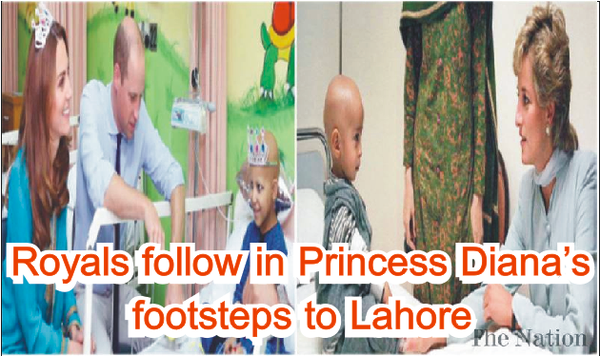 LAHORE - In the third leg of their royal visit to Pakistan, Duke and Duchess of Cambridge visited the cultural capital of Pakistan on Thursday. It was after thirteen years that a royal couple landed in Lahore following a visit by Prince Charles and his wife Camilla in 2006. Late Princess Diana came to Lahore in 1996. Following a warm reception at the Lahore Airport by Punjab Governor Ch Mohammad Sarwar and Chief Minister Usman Buzdar, the royal couple began their day by visiting the SOS Children’s Village, a charitable organisation that provides a home and family structure to over 150 young children. In another act of grace and patronage, Prince William and Kate Middleton attended birthday party of three children, cut cake with the children during their visit of the SOS village. Kate Middleton was even more gracious and personally offered cake to birthday children.

The children showcased their paintings which were admired by Prince William and Kate Middleton. There are an estimated 44,00,000 orphans in Pakistan. These children face numerous challenges, including limited access to food, education and financial stability. With its head office in Austria, SOS Children’s Village is an international organisation active in 135 countries being the largest child welfare organisation in the world. There are 10 SOS villages in Pakistan. Prince William and Kate Middleton also visited the Pakistan Cricket Board’s state-of-the-art National Cricket Academy and played cricket with their fans. They both batted and bowled at each other. In the afternoon, the royals undertook a visit to the iconic Badshahi Mosque and had a discussion with faith leaders to better understand how they were promoting interfaith harmony within their communities.

Khateeb Badshahi Masjid Maulana Abdul Khabeer Azad welcomed the royal guests upon their arrival and escorted them to different parts of the mosque. A 1800-foot long red carpet was specially laid down to welcome the royal couple. Art historian Faqir Syed Aizazuddin also accompanied the royal guests during their visit to the mosque and briefed them about the history of the grand building. The chandeliers were lit up upon arrival of Prince William and Kate Middleton, who visited different parts of the Mughal-era mosque and appreciated its architecture. Kate Middleton wore traditional Pakistani dress and covered her head with green-coloured head-scarf (dupatta).

The Khateeb told Prince William about the visits by his father Prince Charles (2006) and mother Princess Diana (1996) to the mosque. To which the Prince responded that his family had an old bound with the mosque and the Khabeer family. Maulana Abdul Khabeer Azad presented the royal couple different gifts including a painting of the Badshahi Masjid, and traditional white shawls. Duchess of Cambridge won the hearts of Muslims when she covered her head with the scarf in reverence to the Islamic culture and traditions. Prince William also attended a meeting on interfaith harmony, led by Maulana Abdul Khabeer Azad at the grand mosque of Lahore, which was also attended by representatives of minorities including PTI MNA Dr Ramesh Kumar, former MPA Ramesh Singh Arora and Bishop Sarfraz Peter.

The meeting highlighted the importance of interfaith harmony in societies and the role of minorities in progress and development of the countries. MNA Dr Ramesh Kumar said that it was a wonderful opportunity to interact with Prince William at a spiritual place like the grand mosque and share ideas on interfaith harmony. Prince William and Kate Middleton appreciated the idea of interfaith harmony meeting at the grand mosque. Finally, the Duke and Duchess visited the state-of-the-art Shaukat Khanum Memorial Cancer Hospital and Research Centre. It was an emotional visit for Prince William as her late mother had also visited this hospital in 1996. Diana visited Pakistan twice: in 1996 and 1997 — to help raise funds for the hospital.

The Duke and Duchess took time to visit the children’s ward, talking to patients undergoing treatment at the hospital and some of their families. The royal couple was greeted warmly upon their arrival by hospital management. They were briefed about the latest state-of-the-art facilities at the campus by Dr Faisal Sultan, Chief Executive Officer, SKMCH&RC and Dr Aasim Yusuf, Chief Medical Officer.During their visit, Prince William and Kate Middleton interacted with young cancer patients. They admired the cutting edge facilities being provided to the underprivileged cancer patients.

Earlier, while welcoming the visiting guests, Chief Minister Usman Buzdar said that he was heartened to receive them in Lahore. “Your visit to this historic city is an honour for us,” he said. Usman Buzdar said that Pakistanis had a deep respect for the British royal family and this visit depicted growing friendship between the two countries. He believed the visit would further strengthen the bilateral relations.

Prince William and Princess Kate also held a meeting with Chief Minister Usman Buzdar and Governor Ch Sarwar at the airport lounge. British High Commissioner to Pakistan Thomas Drew was also present. During the meeting, matters of mutual interest, including the promotion of Pakistan-UK relations, came under discussion. The chief minister briefed the guests about the development process including steps being taken for public welfare and added that UK’s valuable cooperation for social sector development of Pakistan, especially Punjab province, was praiseworthy. Pakistan and the UK are moving side by side in the journey of development, he added.

He pointed out that UK’s Department for International Development (DFID) had extended valuable cooperation to Punjab province in different sectors adding that it was the best partner for social sector development. He said Punjab government believed in durable uplift of social sector and the development of backward areas had been especially focused. He said steps were being taken to remove their sense of deprivation by developing far-flung areas and provision of necessary facilities to the people is an important priority of the government, added Usman Buzdar.

The chief minister reiterated that historically-important friendly relations existed between Pakistan and the United Kingdom and these ties were being further enhanced. He hoped that this visit would help in the promotion of bilateral relations between the two countries. Governor Sarwar, on the occasion, said relations between Pakistan and Britain had always remained exemplary and the arrival of the British royal couple in Lahore was a momentous opportunity. Usman Buzdar presented painting and traditional stick made of olive wood to Prince William and shawl to Princess Kate Middleton as gifts. Governor Sarwar also presented gifts to the royal couple. Meanwhile, the plane carrying the royal couple could not land at Islamabad airport Thursday night due to bad weather conditions. It was diverted back to Lahore where it landed safely after 45 minutes. The royal couple will spend the night in Lahore.