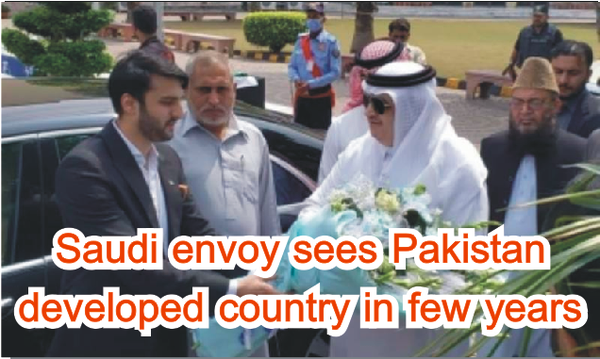 Saudi Arabian Ambassador to Pakistan Nawaf bin Said Al-Maliki on Sunday said that Pakistani forces and people are full of patriotism and he sees Pakistan as a very developed country in the next few years. The Saudi envoy visited the University of Management and Technology (UMT) in Lahore where he was received by President of UMT Ibrahim Hasan Murad who presented him a bouquet. The Saudi envoy was warmly welcomed by the senior university officials. The Saudi envoy planted a tree and hoisted Pakistani and Saudi flags at the UMT’s ground. He arrived at the university from Islamabad via Motorway, reported local TV channel.

Addressing the ceremony, the Saudi envoy said there is an old relationship  between Pakistan and Saudi Arabia. He felt proud to be a Saudi ambassador to  Pakistan. “Saudi Arabia has always supported Pakistan and we need to bring out the positive aspects of us. We have no shortage of talent in Pakistan,” he said.   He further said Pakistan has come a long way in the field of technology. The Saudi envoys said in Pakistan children are taught the sanctity of the green crescent flag at an early age.  He urged the media to show the image of New Pakistan. “I am optimistic for the prosperity and development of Pakistan,” Maliki said.  However he cautioned, “If people fight among themselves in groups then this is not good for the economy.” The envoys said Pakistan is a very important country of the Muslim Ummah.