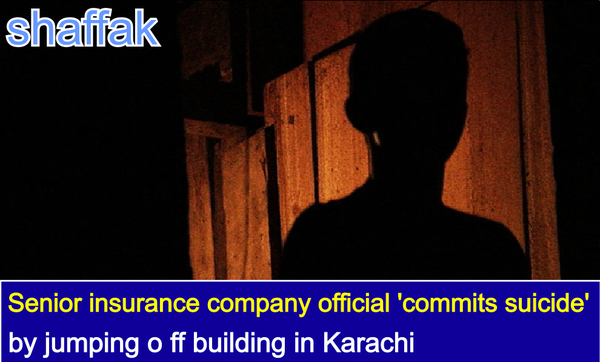 A senior official of an insurance company, who was reportedly facing an inquiry over some "personal activities", on Wednesday allegedly ended his life by jumping from the 11th floor of a multi-storey building on Karachi's I.I. Chundrigar Road, according to police and sources.

His family disputed the claim that Iqbal had committed suicide and suggested that his death was a murder.

The senior officer said that further investigation into the incident was underway because the family had disputed the police version.

According to SSP Haider, a guard deployed at the SLIC office tried to persuade Iqbal not to jump from the building, but the latter proceeded to do so anyway.

Another officer, Mithadar Station House Officer Rizwan Patel, said that they were waiting for a doctors’ report to know more about the death.

The deceased official's body was shifted to the Dr Ruth Pfau Civil Hospital Karachi for autopsy.

A police source told Dawn that Iqbal was reportedly "depressed" of late as an inquiry had been initiated against him by State Life authorities over his "personal conduct" in the office.