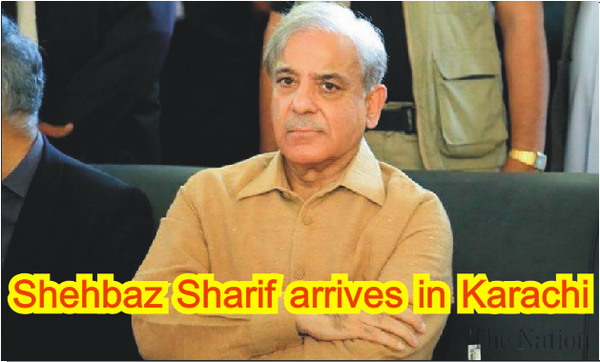 PML-N President Shehbaz Sharif arrived in Karachi today on a one-day visit to the city which was ravaged by torrential rains that triggered power outages and floods in the metropolis' main arteries last week. The PML-N leader arrived with party spokesperson Marriyum Aurangzeb and former interior minister Ahsan Iqbal. He held a meeting with PML-N leaders at Karachi airport's lounge.

According to details, the PML-N leader has met people living in Malir and heard their problems.  Shehbaz Sharif will meet Edhi Foundation chief Faisal Edhi and visit the party’s Nazimabad office during his stay in the city. Before departing for Lahore, the former Punjab chief minister said that he was coming to Karachi with "a message of solidarity" for the people of Sindh.  "After the destruction in Karachi due to [recent spell of] rains, everyone must work unitedly," said Shehbaz.

Speaking about three-time former prime minister Nawaz Sharif, Shehbaz said that he was undergoing medical treatment and would return to the country without delay as soon as his doctors allowed it.  Shehbaz's visit comes a day after Gen Bajwa arrived in Karachi on Tuesday for a two-day visit to the metropolis. The army chief was flown over the city for aerial reconnaissance of the urban flooding's ground impact.